Bitcoin (BTC) realized volatility during quarter three has trended downwards, according to the latest report on the metric from crypto intelligence and research firm Messari.

Per the research platform, the benchmark cryptocurrency recorded the lower volatility as the crypto saw a slight recovery from June lows.

“Bitcoin realized volatility trended downwards as it made a gradual recovery in Q3. Average 30-day volatility for August was 60% compared to over 80% for June,” Messari’s Sami Kassab and Kuna Goel wrote in the State of Bitcoin Q3 2022 report. 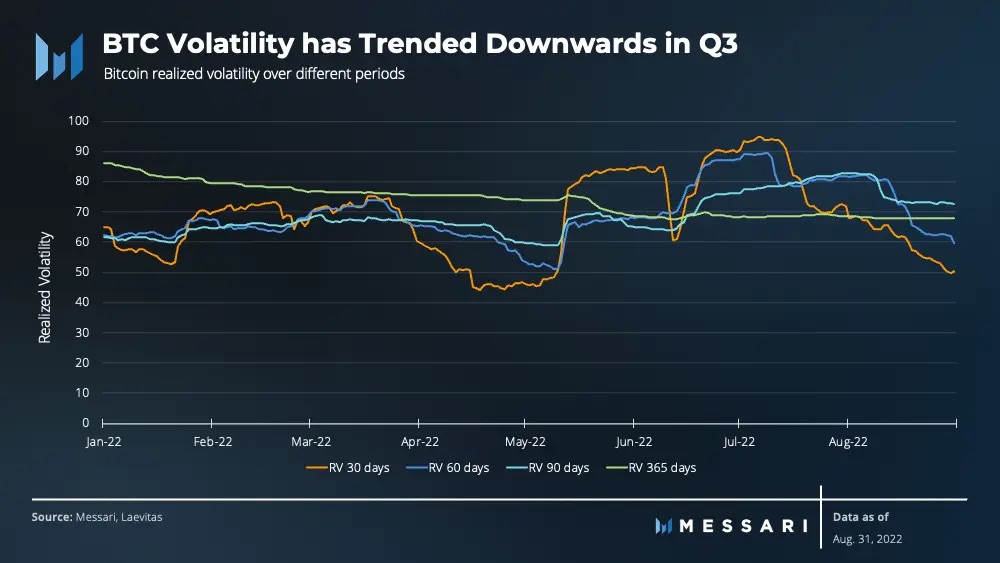 The lower volatility for the world’s largest cryptocurrency by market cap saw the broader crypto market record much lower liquidations across the period, the analysts added. For instance, total long liquidations stood at $5 billion in August, a more than 50% drop from the $10.8 billion recorded in June.

As for total short liquidations, the figure fell to $3.5 billion last month, compared to $6.6 billion total liquidations seen in June.

As crypto prices see-sawed over the quarter, Messari notes, Bitcoin traded more like a tech stock as it tracked the Nasdaq 100 (rebased).

This happened not just as the federal fund rates increased across the three months, but reflected the rot going back to late 2021. Prior,  availability of easy money amid institutional adoption, had helped fuel the bull market.

Overall, Q3 has seen Bitcoin essentially lose two of its key narratives – as an inflation hedge and store-of-value asset – amid the bear market crash that precipitated declines of over 72% since the all-time-highs of 2021.