Cardano ADA/USD to $1? Well, that was the speculation as Cardano neared its long-awaited Vasil upgrade. Indeed, crypto expert Michaël van de Poppe expected ADA to tap $1 around the event if the upgrade is a success. Third week after the event, ADA trades at merely $0.42 and looks very vulnerable. What went wrong?

A crypto analyst, “Guy,” a pseudonym, has come to the rescue of Cardano. In a discussion with another popular crypto analyst Benjamin Cowen, “Guy” thinks ADA will eventually triumph. He says that Cardano has been lacking institutional investors. He notes that when crypto returns, big investors will look at the successful big upgrades and get excited. In this regard, he mentions Cardano’s Vasil and Ethereum Merge as critical.

While the views above are sentimental, notable developments support them. Earlier this month, Cardano founder Charles Hoskinson said hundreds of projects are courting Cardano. He said that was due to the new capabilities brought by the Vasil upgrade. As a notable example, Hoskinson mentioned a decentralised music streaming platform NEWM.

ADA trades at the support as momentum remains weak

eToro offers a wide range of cryptos, such as Bitcoin, XRP and others, alongside crypto/fiat and crypto/crypto pairs. eToro users can connect with, learn from, and copy or get copied by other users. 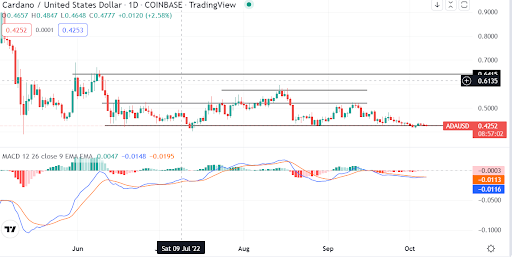 Technically, ADA trades at close to the lowest level in the year. The current level is a support zone, giving ADA a chance to recover. However, momentum is weak, as shown by the MACD indicator, which is deep in bear territory.

Enthusiasm around ADA remains high despite the bear’s weakness. That potentially tells that ADA has been building true but sustainable stories that could inspire a strong comeback. When that happens, time will tell as markets reel from the effects of the projected recession.

Probably, ADA has been devoid of a speculation-led surge. Thus, when recovery happens, it will be real and sustainable since sound fundamentals will drive it.