DOT/USD broke above a crucial horizontal resistance level at $10.5 before surging to $12.20

Polkadot (DOT) has surged to a record high of $12.20 and looks likely to extend its gains beyond $14.00 in coming sessions. DOT is up by more than 35% in the past 24 hours and currently trades around $12.07 on Kraken at the time of writing.

The strong rally follows a break above a key horizontal resistance line at $10.50, which allowed bulls to build momentum above $11.00 and push higher.

The uptrend saw Polkadot climb into the fifth spot among the largest cryptocurrencies by market cap. At the time of writing, it has a market cap of $10.9 billion, behind struggling XRP that lies fourth with a market cap of $13.3 billion.

DOT/USD has posted higher highs since its uptrend began after it dumped to lows of $7.20. Once bulls managed to retest and successfully broke above the $8.50 level, they targeted the$9.00 pivot level.

On the 4-hour chart, DOT/USD managed to break above a descending trend line and the 61.8% Fibonacci retracement level of the downward move from $10.70 high to $7.20 low. The levels had capped prices near $9.38, but turning it into support allowed bulls to target and retest the 76.4% Fib retracement level at $9.90.

The upside also included a break above a horizontal resistance line at $10.50, with bulls surging to the all-time high of $12.20. 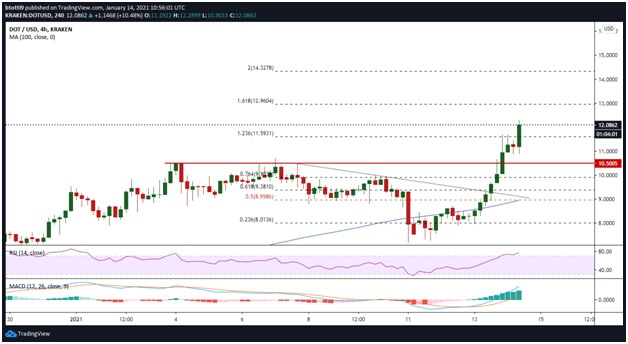 Currently, bulls are looking to sustain momentum above the 123.6% Fibonacci extension level ($11.59) on the 4-hour chart. The RSI is still rising but has not extended into the overbought territory, and the MACD is showing strength in the bullish zone.

These positives give bulls the advantage, with resistance likely to test bulls’ resolve around the 161.8% Fibonacci level at $12.96.

If DOT price gains fresh momentum above this level, an impulse break to the 200% Fibonacci level at $14.32 could clear the path to $17.00. Bulls have the potential to ride a bullish wave in the altcoin market, with a break to the coveted $20.00 level likely in the short term.

On the downside, a rejection could see DOT/USD drop to the initial support zone near $11.17 and then to the horizontal line at $10.50. Should buyers accept more losses, the 100-SMA (4-hour chart) at $9.00 provides a crucial anchor.