Nearly a month after the Cardano hard fork, the native cryptocurrency (ADA) remains underwater. Largely, the bearish price action is due to a weak market sentiment. However, data by CoinMarketCap shows ADA making bigger slumps compared to its closest rivals.

As of press time, ADA price was trading at $0.357, shedding 8.65% in the past week. The decline is the largest among the cryptocurrencies in the top ten bracket by market cap. Amid the bear momentum, Cardano is witnessing increased activity.

Data shows Cardano network transactions rose 75% month-over-month to 97,959 on October 19. The NFT volume on the network reached 3.0 million on October 17. On October 15, Coin98 Analytics ranked Cardano second in terms of active developer counts. The developments are positive and indicate that Cardano could continue to grow.

Amid the developments on Cardano, whales are showing limited interest in taking the price higher. The price action shows no end in sight for ADA after the token lost an important $0.42 support. 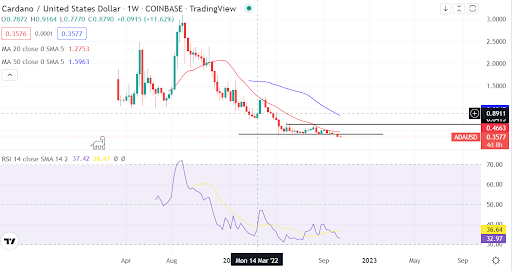 ADA’s price action on the weekly chart shows the token crashing below $4.2. The decline suggests a bottomless next price for ADA with no support in the vicinity. An RSI reading of 32 highlights that bears has been aggressively selling the token after it lost the support. The token is near oversold, but this doesn’t signal an imminent bullish reversal.

Is ADA a buy now?

There is no clear buy zone for ADA below $4.2. Conversely, we cannot confidently tell the next likely support for the cryptocurrency. As long as ADA trades below $4.2, we discourage buying the token.

Instead, traders should wait until ADA recaptures $4.2 to buy it. The sentiment should also work in favour of the cryptocurrency.

Where to buy ADA

eToro offers a wide range of cryptos, such as Bitcoin, XRP and others, alongside crypto/fiat and crypto/crypto pairs. eToro users can connect with, learn from, and copy or get copied by other users.